This report was written by the Resistance Lab collective. More about us on our website: resistancelab.network.

Please cite it as: Resistance Lab (2021). Despite their claims to the contrary, Taser usage by Greater Manchester Police has risen to its highest ever level. Manchester, UK. Retrieved from: resistancelab.network/.

Despite their claims to the contrary, Greater Manchester Police (GMP) are now using Tasers more than ever before according to new Home Office data. This data shows the highest use of the weapon in England and Wales on record.

Infographics published by GMP on their website and circulated to community groups indicated that their Taser use was declining. However, this is directly contradicted by data reported by GMP to the Home Office which shows Tasers being used at more than double the rate claimed in these infographics for the same April 2019 - March 2020 period. The Home Office data show that GMP’s Taser usage has actually increased a further 7%, and is now at its highest ever level. Racial disproportionalities have widened, with Black people now more than 5 times more likely to be the subject of a use of force incident involving Taser than white people. Use against children has also increased from 118 to 132 incidents. 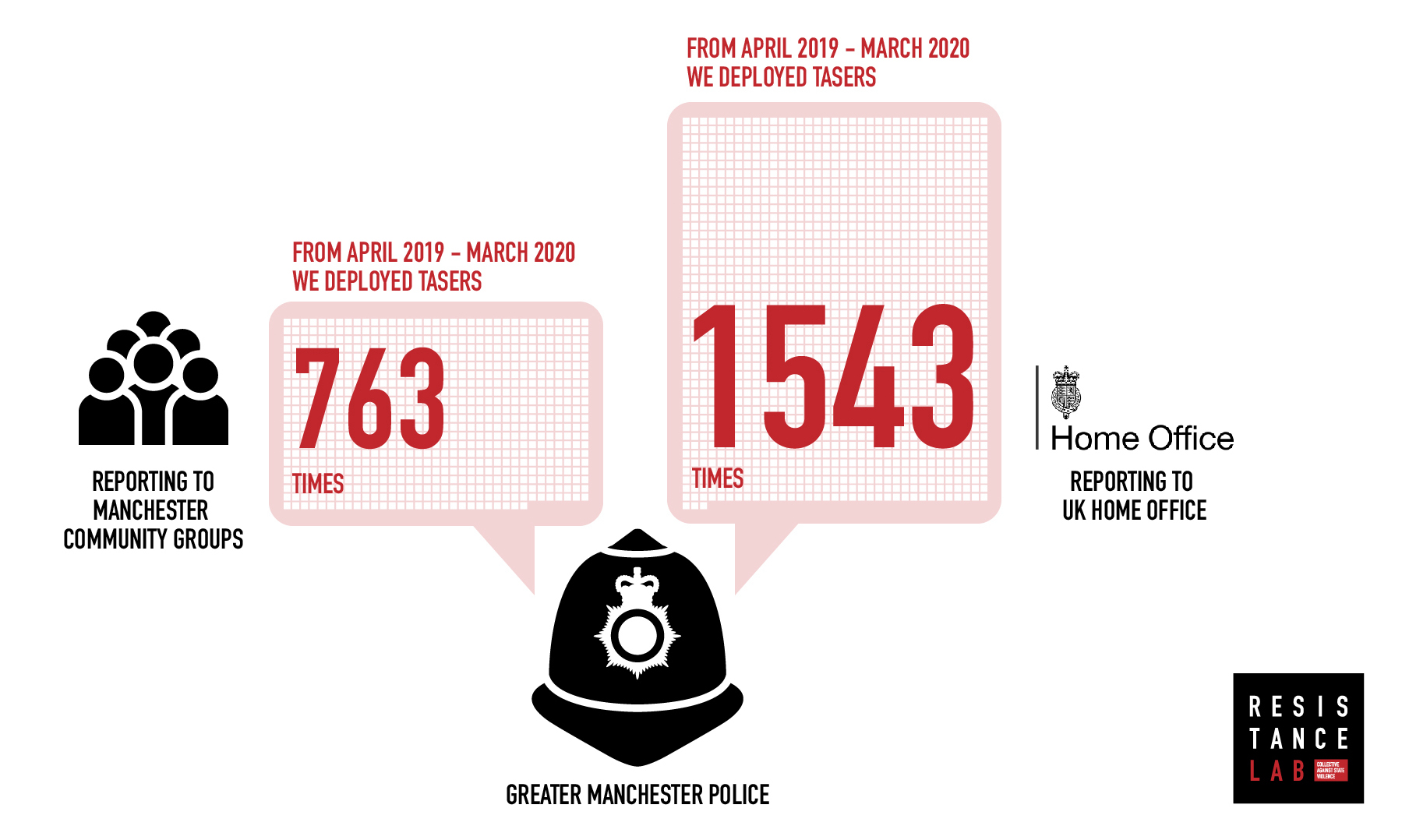 In the last year, GMP have been placed into ‘special measures’ over systemic data mishandling including the loss of 80,000 crime reports culminating in their most senior officer resigning over the matter. The force was also ordered by the IOPC to issue an apology to Michael Gilchrist, a fifty-three-year-old man diagnosed with autism and a learning difficulty, who was repeatedly subjected to Taser and CS gas following a mental health episode in 2014.

Despite the establishment of a new Race Equality panel for Greater Manchester, and statements in support of Black Lives Matter from the Police and City Council, GMP have now introduced plans to double the number of Taser-trained officers on the street.

Taken together, these events raise serious concerns about GMP’s transparency and honesty with the community they claim to serve. Resistance Lab calls on the Mayor of Greater Manchester, Andy Burnham and the Deputy Mayor for Policing and Crime Baroness Beverley Hughes to immediately halt the roll out of Tasers to additional frontline officers.

In August 2020 Resistance Lab published A Growing Threat to Life: Taser Usage by Greater Manchester Police, a report documenting the intrinsic and potentially lethal threat posed by Taser in the hands of police in England and Wales. We wrote the report in response to the stories of the many victims of police Taser usage here in Greater Manchester and around the country. Since their introduction in 2003, 18 people have died following Taser usage by police and many more have sustained serious injury and trauma. In many cases, these individuals and their families have fought protracted battles through complaints processes, independent investigations and the courts, both to secure justice and alert the nation to the threat to life posed by Tasers in the hands of police.

Drawing on the Home Office statistics and personal testimony from local community members, our report showed that these warnings from the victims and their families were not being heard. Tasers were being rolled out to more officers around the country and their use was becoming increasingly routinised. Between April 2017 and March 2019, Greater Manchester Police (GMP) saw a 73% increase in total Taser incidents. Moreover, GMP was disproportionately using the weapon against Black communities. In 2018/19, Black people in Greater Manchester were subject to Taser usage at nearly 4 times the rate of their white counterparts.

We were also disturbed to learn that Tasers were being used against children and vulnerable adults, particularly individuals with mental health issues. During the same period, GMP reported 118 incidents involving the use of a Taser, whether discharged or not, against children perceived by the officer to be under the age of 18. Eight of those incidents involved children under 11 years of age. These figures suggested that both violence and threats of violence were being normalized against the most vulnerable in our communities. In fact, in many of the Taser stories documented in the Resistance Lab report GMP were contacted by a friend, neighbour or family member concerned for the emotional or mental well-being of an individual. When the police arrived, rather than help the individual in question they escalated the situation by drawing and firing a Taser. We expressed particular concerns about these incidents and the potentially deadly impact Tasers can have when used against individuals with underlying health issues such as cardiac and pulmonary conditions, epilepsy and diabetes.

Following the report’s publication and against the backdrop of wider #BlackLivesMatter demonstrations, Deputy Mayor Hughes acknowledged the racial disproportionalities asserting that authorities were “working hard to understand this as we prepare to publish… our first ever Greater Manchester Race Equality Policing Report on the use of a wider range of policing powers including Tasers.” That report will be co-produced with the newly appointed Race Equality Panel. As to Resistance Lab’s broader findings, assistant chief constable Nick Bailey argued that the rapid growth in the weapon’s use stemmed from an increase in the number of GMP officers who are Taser-trained following a review in 2017. According to Bailey, more recent figures indicated a stabilisation in the rates of Taser usage: “Our figures also show that incidents involving a Taser have reduced with the latest figures from 2019-20 showing a drop from 1,442 to 1,336”, he said. Claims of a decline in Taser usage were also reinforced by use of force statistics published quarterly on GMP’s website. For the period between April 2019 and March 2020, GMP reported that Tasers were “drawn” 592 times and “discharged” 171 times.

However, Bailey’s predictions are in direct contradiction to the Home Office’s latest use of force statistics which show further increases in Taser usage in Greater Manchester and across the nation. Between April 2019 and March 2020, the Home Office reported a total of 32,057 incidents in which a Taser was used, whether discharged or not, by police in England and Wales. This constituted a 36.7% increase in Taser usage from 2018/19 when 23,451 incidents were reported. During that same period, GMP reported that the force’s Taser usage had increased by 7% up from 1,442 incidents in 2018/19 to a new high of 1,543 incidents in 2019/20.

In short, the new Home Office data establishes that between April 2019 and March 2020 GMP’s use of Taser continued to grow and that concerns about racial disproportionalities in the weapon’s usage as well as it’s impact on children and other vulnerable communities have deepened. Despite these known risks, GMP are moving forward with a decision to double the number of Taser-trained officers in 2020/21 drawing on new funds from the Home Office.

The publication of the Home Office data raises serious concerns about the accuracy of GMP’s own representation of use of force statistics in public forums. Each quarter GMP publishes Use of Force statistics on the organisation’s website. An examination of these quarterly reports for the period under review shows that GMP is presenting data on Taser in a manner wholly inconsistent with the Home Office methodology leading to potential misconceptions and the gross underrepresentation of the weapons usage. Ensuring public trust requires accuracy and transparency in the collection, preservation and dissemination of data. These principles are especially important in the context of recent data breaches including the Home Office’s deletion of 150,000 biometric records and the decision of Her Majesty’s Inspectorate to place GMP in ‘special measures’ for systemic failures related to crime recording. The Mayor of Greater Manchester, Andy Burnham, has raised significant concerns about GMP’s deliberate withholding of information and culture of defensiveness when challenged.

These findings also coincide with the IOPC’s call for greater scrutiny of Taser as well as the announcement by the National Police Chiefs’ Council and the College of Policing of an Independent Review into Disproportionate Effects of Use of Taser. Particular concerns have been raised about GMP’s use of Taser with the IOPC launching high profile investigations into officers’ use of the weapon against Desmond Ziggy Mombeyarara in front of his young child in a Stretford petrol station forecourt in May, 2020. In December, the independent watchdog also called on GMP to ‘reinvestigate’ allegations of ‘excessive force’ and racism related to Michael Gilchrist. Gilchrist, a fifty-three year old man diagnosed with autism and a learning disability, was repeatedly subjected to Taser and CS gas following a mental health episode in 2014. In May 2019, High Court judge Justice O’Farrell ruled that the use of force was ‘unjustified, unreasonable and inappropriate.’ However, a subsequent internal investigation resulted in GMP finding no cause for disciplinary action. Gilchrist’s mother, Novlyn Graham, appealed the decision to the IOPC resulting in the order to reinvestigate with GMP forced to issue an unreserved apology to the family.

Resistance Lab calls upon the Mayor, Deputy Mayor, and members of both the Greater Manchester Race Equality Panel and Police and Crime Panel to engage with the findings of our recent report along with the updated Home Office data. Some important first steps would include calling for an immediate halt to the decision to double the number of Taser-trained officers as well as joining groups like the United Nations Committee on the Rights of the Child, Children’s Rights Alliance for England (CRAE), and Black Mental Health UK in supporting a statutory ban on the use of Tasers against children and people detained under the Mental Health Act. However, based on the evidence presented and the longstanding appeals of victims and their families, Resistance Lab calls on Greater Manchester authorities to set an example for the rest of the UK and abolish Taser completely.