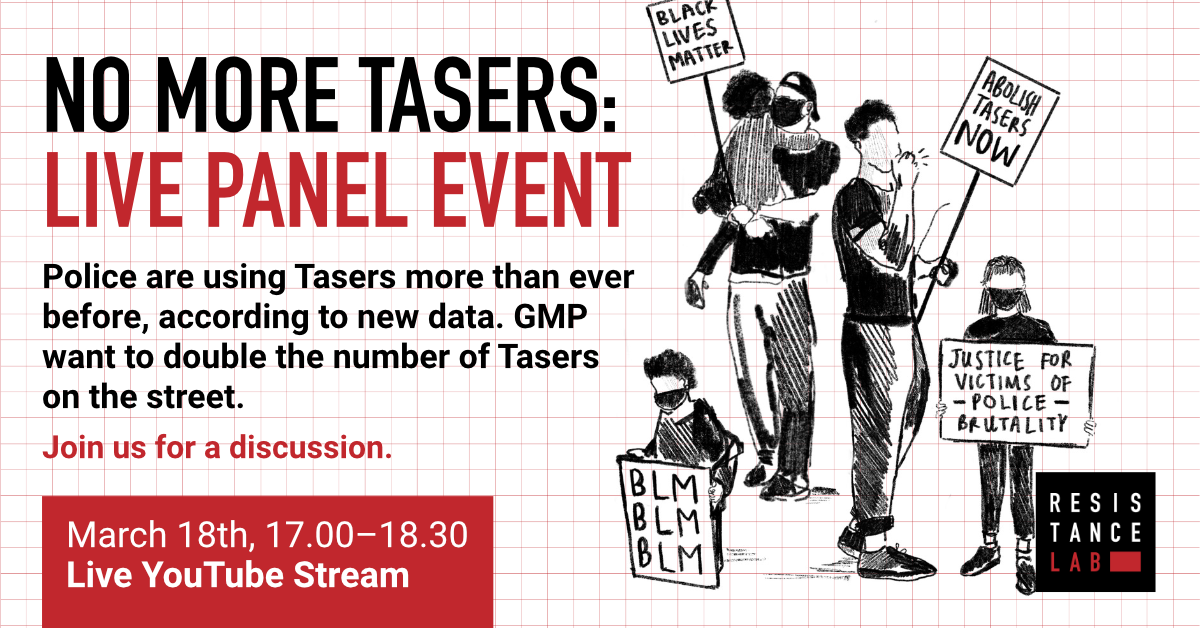 Police Taser usage in England and Wales is now at its highest-ever levels, according to new Home Office data for 2019-20.

In August 2020, Resistance Lab published A Growing Threat to Life: Taser Usage by Greater Manchester Police (GMP), a report documenting the intrinsic and potentially lethal threat posed by Taser in the hands of police in England and Wales. We wrote the report in response to the stories of the many victims of police Taser usage here in Greater Manchester and around the country. Since their introduction in 2003, 18 people have died following Taser usage by police and many more have sustained serious injury and trauma. In many cases, these individuals and their families have fought protracted battles through complaints processes, independent investigations and the courts.

Despite multiple assurances to the contrary, Greater Manchester Police’s Taser use, like much of the country, is now the highest on record, with last year’s statistics showing an even more highly disproportionate impact on Black people and other vulnerable populations. Despite statements in support of Black Lives Matter from GMP, the institution of a new Race Equality panel, the imposition of ‘special measures’ on GMP, the resignation of the GMP’s most senior officer over data mishandling, and Michael Gilchrist and his family finally getting an apology after many years of dismissal from Manchester authorities, Greater Manchester Police have now announced they want to double the number of Tasers on the street.

We say no more.

The event will be livestreamed on our YouTube channel, and available on our website afterwards. We’ve embedded it below as well.

If you want to ask our panel a question in person or by text, please fill in this form.

Chair: Patrick Williams (he/him), MMU & Resistance Lab. Patrick is a senior lecturer and activist. His interests are in the areas of ‘race’ and ethnicity, with a particular focus on racial disparity, disproportionality and differential treatment within the Criminal Justice System.

He authored Being Matrixed: the (over)policing of gang suspects in London on behalf of Stopwatch, which foregrounds the narratives through storied recollections of young peoples’ experiences of being registered and policed as a gang suspect. He also co-authored Dangerous Associations: joint enterprise, gangs and racism. This study explores the complex, yet misconstrued associations of black people who are (police) identified as involved with serious violence, demonstrating how the ‘gang’ label drives the imposition of harsh collective punishments and lengthy custodial sentences. [Twitter]

Michael Shiner (he/him), LSE & Stopwatch. Mike is an Associate Professor in social policy. His research revolves around three related themes: deviance, crime control, and discrimination. He recently co-authored The Colour of Injustice: ‘Race’, drugs and law enforcement in England and Wales, and was one of those to resign from the National Police Chief’s Taser advisory group in 2020. Michael is a consultant to the Fair and Effective Policing Project at the Open Society Justice Initiative and is a Trustee of StopWatch.

Stafford Scott (he/him), activist & author. Stafford is a life-long activist behind dozens of campaigns and actions who co-founded the Broadwater Defence Campaign in 1985. He is a consultant on racial equality and community engagement. [Twitter]

Jessica Pandian (she/her), Institute of Race Relations & Inquest. Jessica’s work focuses on institutional racism in the police. In particular, she is focussing on the use of force, from the low-level to tasers and firearms, and on the historic continuities of British policing. Jessica has an MPhil in Latin American Studies, in which she researched anti-Black policing, histories of gang violence, and racial resistance across Latin America and the Caribbean.

Kim Foale (they/them), Geeks for Social Change & Resistance Lab. Kim is the editor and lead data scientist on the Taser Report. They are a community activist with experience working with a wide range of campaign groups in Leeds, Manchester and Nottingham. As a web developer and researcher, they founded Geeks for Social Change as a design studio aiming to use technology as a tool for transformative social change. [Twitter] [Website]